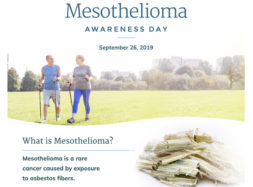 CEND-associated Immunotherapeutics and Vaccine Research Initiative (IVRI) is happy to collaborate with Colin Ruggiero of Mesothelioma Cancer Alliance, to bring more attention and hope to mesothelioma cancer. September 26 is Mesothelioma Awareness Day, designed to raise awareness of this rare cancer, research advancements, and the dangers of asbestos.

According to the American Cancer Society, over 1.7 million new cases of cancer are diagnosed each year in the United States. Of this total, nearly 3,000 Americans receive a diagnosis of mesothelioma cancer. With mesothelioma being a small percentage of this total, it often falls under the radar in mainstream oncology discussions. While it is important that researchers are discovering cures for more common forms of cancer; improving treatment options for those with difficult-to-treat cancers is imperative. Fortunately, for patients who suffer from rare cancers, a new area of treatment is emerging.

This new area is immunotherapy, and it aims to utilize the body’s own immune system to fight back against the disease. Specifically, an immunotherapy known as CAR-T cell therapy has been proving its efficacy in treating blood and lymph node cancers. This treatment is now being put to the test in treating solid tumor cancers such as malignant pleural mesothelioma.

As stated previously, CAR-T cell therapy has shown promising results in treating hematological malignancies. Now, the goal is to utilize this treatment to treat those with solid tumors. The way that this therapy works is by using a patient’s own T cells to target and destroy cancer cells. T cells are taken from a patient’s blood, where they are then grown in a lab and given a gene for a specialized receptor known as a chimeric antigen receptor (CAR). What this chimeric antigen receptor does is transform these T cells into cancer-targeting cells. These new T cells are then reinfused into the patient’s bloodstream, where they will begin to target and kill cancerous tumor cells.

Patients with advanced-stage solid tumors, such as mesothelioma, have poor outcomes despite treatments. This is due to traditional treatment methods failing to target the tumor directly, or because the tumor is suddenly resistant to the treatment, which is something that may occur when being treated with chemotherapy. With CAR-T cell therapy utilizing the immune system of the patient, these familiar cells are more likely to be on target, and in turn, experience greater success, as shown  in blood cancers.

Malignant pleural mesothelioma (MPM) typically develops in the lining of the lungs, otherwise known as the pleura, and accounts for nearly 80 to 90 percent of all cases. The only known cause of this disease is exposure to asbestos fibers, a carcinogenic mineral that was used in a wide variety of products between the 1920s to the 1980s. This form of cancer is extremely aggressive, with an average life expectancy of 12 to 21 months once diagnosed. With the cancer’s ability to progress so quickly, and because it is often diagnosed at a later stage, treatment options have historically been very limited. However, researchers are finding that MPM patients are actually great candidates for CAR-T cell therapy. This is due to the fact that mesothelin (MSLN), a tumor differentiation antigen, is often underexpressed on healthy cells and overexpressed on MPM cancer cells. This means that researchers can create new T cells that target this differentiation antigen, which will allow them to attack the cancerous tumor cells without harming the healthy cells.

In March of 2019, A team led by Dr. Prasad Adusumilli of Memorial Sloan Kettering Cancer Center (MSK) published their initial results of a clinical trial they conducted involving patients with malignant pleural disease (MPD) and CAR-T cell therapy. Of the patients with MPD, 19 had MPM, 1 had lung cancer, and 1 had breast cancer, making 21 patients total in the study. All patients were given a single dose of lcasM28z CAR-T cells intrapleurally.

These patients were then closely monitored for signs of on-target, off-tumor toxicity. This monitoring is a vital part of the treatment process, as toxicity could cause complications such as cytokine release syndrome (CRS). The CAR-T cells had been equipped with the lcaspase-9 safety gene, so that the modified T cells could be destroyed if toxicity occurred. Fortunately, this was not necessary, as no signs of toxicity were observed amongst the patient group, and the results were promising. Two patients had a complete response as shown by PET scans, five patients had a partial response, and four other patients were noted as having a stable disease. While this is an early study with more trials to come, the lack of toxicity and the presence of anti-tumor activity is a major step forward in solid tumor cancer research.

Treatment options are evolving rapidly for cancer patients. Immunotherapy is providing personalized treatment routes specific to those who suffer from well known and rare cancers, something that was unimaginable a decade ago. Continued research and investment in new studies and bold ideas, including through IVRI or other academic institutions, will lay the groundwork for novel, cutting-edge therapies needed to eliminate mesothelioma.