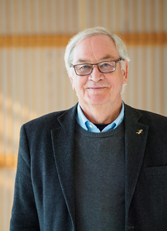 Geoff earned his Ph.D. in Physics (Applied Optics) at Imperial College, London, studying the visual detection of optical signals. That work sparked an interest in signal processing in the retina and so he moved, with his new American wife, to California in order to learn techniques for recording physiological signals from single neurons. After post-doctoral work at UCLA and UCSF, he moved to SUNY Stony Brook as an Assistant Professor. An award from NIH allowed him to spend two years in the laboratory of Sir Alan Hodgkin at Cambridge University after which, in 1980, he was recruited to the department of Biophysics and Medical Physics at UC Berkeley. He subsequently served as Chair of that department and later as Chair of the department of Molecular and Cell Biology. Throughout that time, he continued to pursue his research into  the processing of signals in the vertebrate retina which, in 1998, earned him the degree of D.Sc. in Physiology and Biophysics by the University of London. In 2002, Geoff was appointed Dean of Biological Sciences and, after securing a generous gift from Henry H. (Sam) Wheeler, he founded CEND in 2008. Now officially retired, his other interests include music (mostly classical), history and sailing.